The ability to confine and manipulate single particles and molecules has revolutionized several fields of science, with common methods including optical traps and magnetic tweezers. Automated flow control offers an attractive method for particle manipulation without the need for optical, electric, acoustic, or magnetic fields. Our group developed the Stokes trap, which is a new method for trapping and manipulating small particles using only fluid flow. The Stokes trap allows for precise control over the center-of-mass position, orientation, and trajectories for multiple particles using only fluid flow. We are using this technique for the fluidic-directed assembly of particles in solution, and we are further studying the dynamics of soft materials such as lipid vesicles, polymersomes, and collision and adhesion events for membrane-bound vesicles. This technique opens new vistas for directed assembly of particles and fundamental studies of particle-particle interactions. 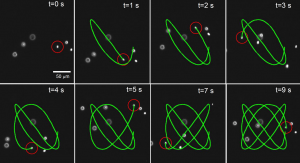 Suspensions of anisotropic Brownian particles are commonly encountered in a wide array of applications such as drug delivery and manufacturing of fiber-reinforced composites. Technological applications and fundamental studies of small anisotropic particles critically require precise control of particle orientation over defined trajectories and paths. In this work, we demonstrate robust control over the two-dimensional (2D) center-of-mass position and orientation of anisotropic Brownian particles using only fluid flow. We implement a path-following model predictive control scheme to manipulate colloidal particles over defined trajectories in position space, where the speed of movement along the path is a degree of freedom in the controller design. We further explore how the external flow field affects the orientation dynamics of anisotropic particles in steady and transient extensional flow using a combination of experiments and analytical modeling. Overall, this technique offers new avenues for fundamental studies of anisotropic colloidal particles using only fluid flow, without the need for external electric or optical fields.

Extensional viscosity is a key property of complex fluids that greatly influences the non-equilibrium behavior and processing of polymer solutions, melts, and colloidal suspensions. In this work, we use microfluidics to determine steady extensional viscosity for polymer solutions by directly observing particle migration in planar extensional flow. Tracer particles are suspended in semi-dilute solutions of DNA and polyethylene oxide (PEO), and a Stokes trap is used to confine single particles in extensional flows of polymer solutions in a cross-slot device. Particles are observed to migrate in the direction transverse to flow due to normal stresses, and particle migration is tracked and quantified using a piezo-nano positioning stage during the microfluidic flow experiment. Particle migration trajectories are then analyzed using a second-order fluid model that accurately predicts that migration arises due to normal stress differences. Using this analytical framework, extensional viscosities can be determined from particle migration experiments, and the results are in reasonable agreement with bulk rheological measurements of extensional viscosity based on a dripping-onto-substrate (DoS) method. Overall, this work demonstrates that non-equilibrium properties of complex fluids can be determined by passive yet non-linear microrheology.